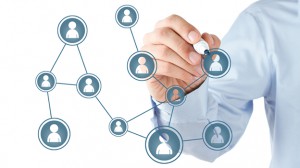 What is the lifeblood of any business? Product movement to the end consumer.

Have you read Sam Walton’s autobiography? His vision—the business model he pioneered – was brilliant. Walton started Walmart and Sam’s Club. He said, “We will be the largest retailer in the world.” This goal was achieved because he found a way to move product to the end consumer at the cheapest price.

How did Walton do that? He asked, “Do people care when they buy their groceries, whether there’s an acoustical tile ceiling or roof rafters and white bar joists?” The answer turned out to be, “They don’t care.” So, he invented a business model where you have shelves with cases and cases and cases of products on top. In the evening, stockers bring that stock down to fill the shelves. Walmart and Sam’s Club stock their warehouses for their major supplier manufacturing companies, saving those companies a of money.

Walton built massive warehouses around the world. Then, he talked to all these companies like Kimberly-Clark, Hershey, Johnson & Johnson, Levi Strauss, saying, “Hey! Don’t build expensive warehouses all over the place. Ship your products to my warehouses, and I’ll store them. As we sell them, I’ll pay you.”

So, when the cashiers scan that bar code on the Scott paper towels, Kimberly-Clark knows Walmart sold 73 cases today. The system tracks that sale. Then, at the end of the day, Walmart sends the company its money.

Other retail outlets don’t have the space—or the vision—to make this offer to suppliers. Instead, they buy stuff in smaller quantities, store it in the back, and move it to the front as needed. There’s no tall, tall, tall ceiling with products stacked way up above you. That’s the way it’s always been done. But that’s not how Walmart does it. Sam Walton proved that point.

Every other retailer was left in the dust

How did he do it? How did Walton achieve such landslide success? The bottom line is he cut the overhead for all of his product suppliers! So, Walmart & Sam’s Club pay less for identical products than other retail outlets. And, they can pass the savings on to consumers, attracting throngs of buyers to their stores. Another strategy that brought monetary success was charging a membership fee for Sam’s Club. That and the warehousing of products allow Walmart and Sam’s Club to sell at a very low price. It’s all in the business model! The moral is, whoever figures how to move product to consumers at the best price, wins.

How does this apply to network marketing? Look at every company, every compensation plan. Let’s say every company pays out 50% of retail to reps. On each product, no matter the cost, 50% commission is paid. You can only cut the pie so many ways, whether you pay 50% commission on $79.95, or 50% commission on the identical product at $39.95. Do you think the $39.95 price makes it much easier to sell twice as much or three times as much? Cut the overhead, and you have a better chance to sell that product. You’re not just competing against other network marketing products. You’re also competing against Sam’s Club & Walmart. Your business model better let you make a good offer to the consumer, or you’ll never succeed.

Whatever network marketing company finds a way to move product to the end consumer at the best price, wins. And, that’s definitely the company you want to build your future with.

All Articles, Build your Direct Sales Business, How to Start a Direct Sales Company, MLM Leadership and People, Why Engage in Network Marketing?