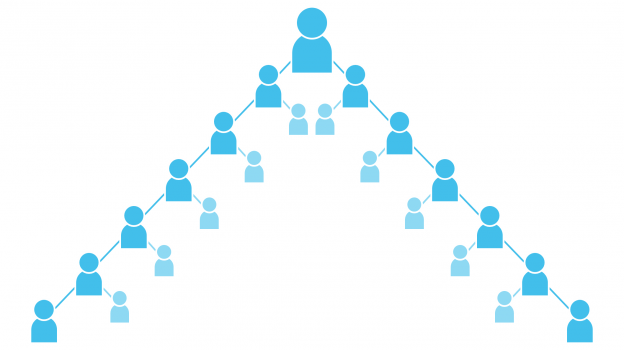 The binary compensation plan is the newest of the three common plan types. When it arrived on the industry scene, this type of plan was the complete opposite approach to commissions than existing plans. The difference was night and day. Before the binary emerged, every other compensation plan relied on the following two premises:

In contrast, the binary plan relies on the following two opposite premises:

This represents quite a break from the traditional way of doing business. But this plan survived the test of time to become one of the dominant compensation plan types in the MLM industry.

How does a binary work?

A binary compensation plan does not pay on levels like other plans, but on the sales volume of the weak leg. The plan pays Karen 10% on her weak leg, so if her two legs are close to each other in volume, she’s getting roughly 5% of her entire organization’s volume. With a binary plan, depth really doesn’t matter, because these plans pay distributors on their volume all the way to the bottom of the tree. What matters is the balance of sales volume between the legs.

Most binary plans pay a weekly pool commission. A distributor has two first-level distributors who must each generate an amount of sales volume. The company puts aside an amount of money in a pool and then divides it up among those who qualify.

In this example, Karen’s first center gets a 10% commission on all the volume under her third center. Her second center is the top of her reference leg, so her first center doesn’t earn on its volume, but the second center itself gets 10% on the weak leg of the organization beneath it.

Again, she earns on all her volume except that generated in her second center’s reference leg and she earns twice on her third center’s pay leg.

A typical binary compensation plan would specify that if a distributor has at least $500 in volume on the weak leg, they would receive 10% of their weak leg in commission. However, one of the rules of almost all binaries is that they have a payout cap of somewhere between 40 and 50%. This means that if a company adds up all of its commission payments and the total exceeds the payout cap, the company has to reduce everyone’s payment proportionally to keep the total payout below this cap. We call this scenario hitting the cap. All binaries hit the cap, so it’s is important to be familiar with this feature.

It should pay out $550,000 in commissions, which is 10% over the set cap. Instead of doing that, the company will reduce everyone’s commissions by 10% in order to stay below the payout cap. Distributors get only 90 cents on every dollar.

Distributors seem to either love binary compensation plans or hate them. These plans inherently reward salespeople and sales leaders better than almost any other type of plan. They pay well, but distributors can find the structure challenging to deal with. It is a big plus that distributors no longer have to evenly balance the volume of the two legs.  Binaries can maximize their success by combining the base commission with other types of commissions.