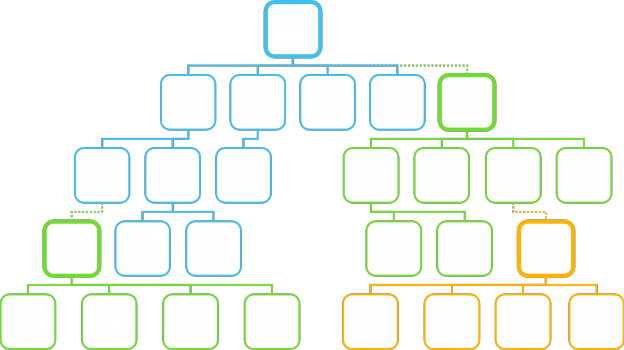 Let’s say Karen is a salesperson just starting out. Here’s what her group looks like right now. 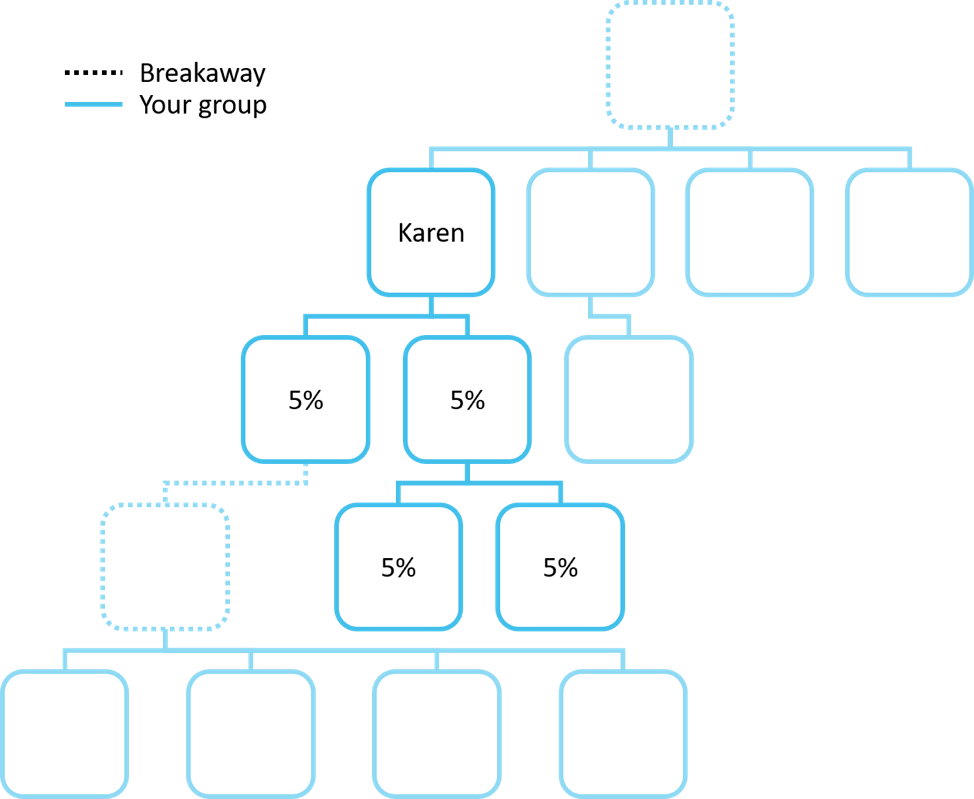 Here, Karen is receiving a level commission payout. She gets 5% on each member of her group. She’s inside the group of the breakaway above her but everything below her up until the next breakaway is her group for payout purposes. In a level commission, she gets a certain percentage on a certain number of levels. Here she qualifies for two levels and she get 5% on all the volume she qualifies for. If everyone in this tree generates $100 of personal volume (PV), she’ll get a $20 commission. 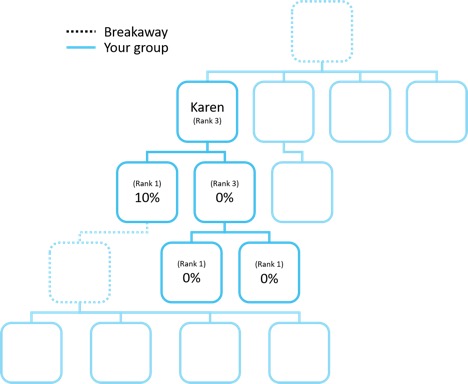 As a rank 3, she qualifies for 10% on all the rank 1s beneath her, but she’s blocked from getting paid on the volume from two of them because another rank 3 has already taken that 10%. If everyone generates $100 of volume, Karen gets $10.

Now let’s look at Karen’s commission if she becomes a breakaway. 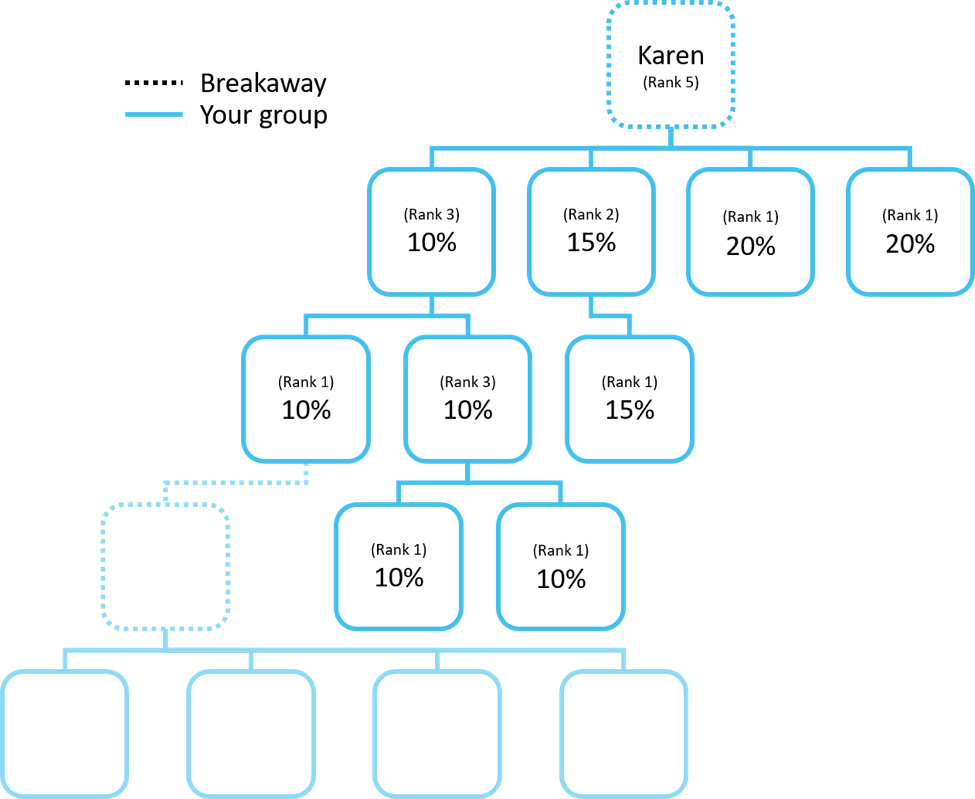 The next breakaway beneath Karen is a rank 5, like her, so she isn’t qualified to be paid on his volume, and because he takes the remaining differential for the distributors beneath him, she doesn’t get a differential commission on any of them either.

As a sales leader, or breakaway distributor, Karen is paid that same group volume commission but she also gets a generation commission which pays a percentage on the group volume of breakaway distributors beneath her. This is often called a sales leader override. The percentage Karen is paid on the generations beneath her is less than what she’s paid on her own group. 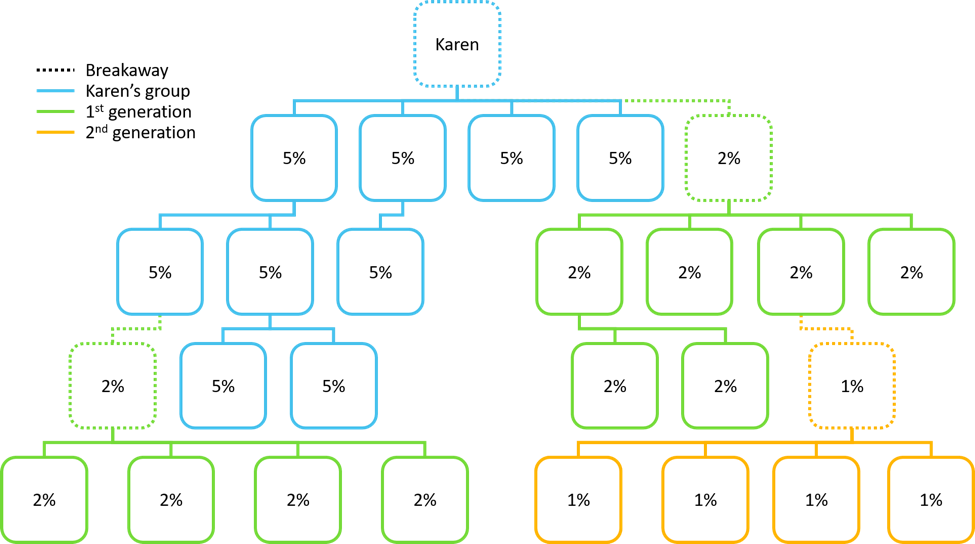 We’ve reverted to the level group volume commission for the sake of ease, but remember this is only one way that bonus can pay. Again, if everyone in this tree generates $100 PV, Karen gets a $45 commission on her group (5% of $900) and a $24 commission on her first generation (2% of $1,200), and a $5 commission on her second generation (1% of $500). These percentages are just examples—each plan will have its own specific rules for how much distributors get on each generation.

Distributors have to keep an eye on their organizations, anticipate when downline distributors are going to break away, and prepare accordingly to stay qualified. But even if Karen stays qualified as a breakaway, she’s going to lose some commission dollars when someone beneath her breaks off. Note that in the example above, the commission she received at the beginning was greater than the commission she received at the end. Let’s look at a more detailed example. 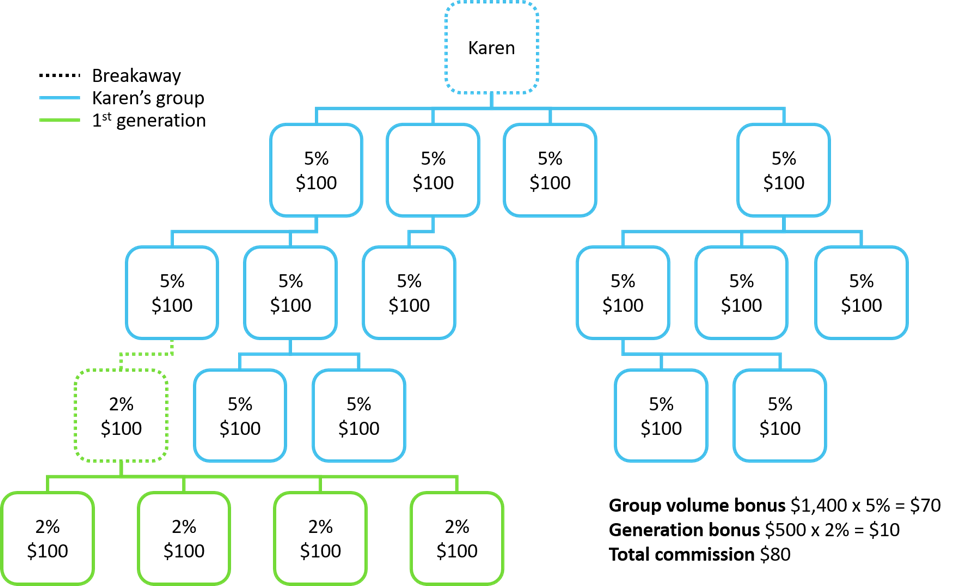 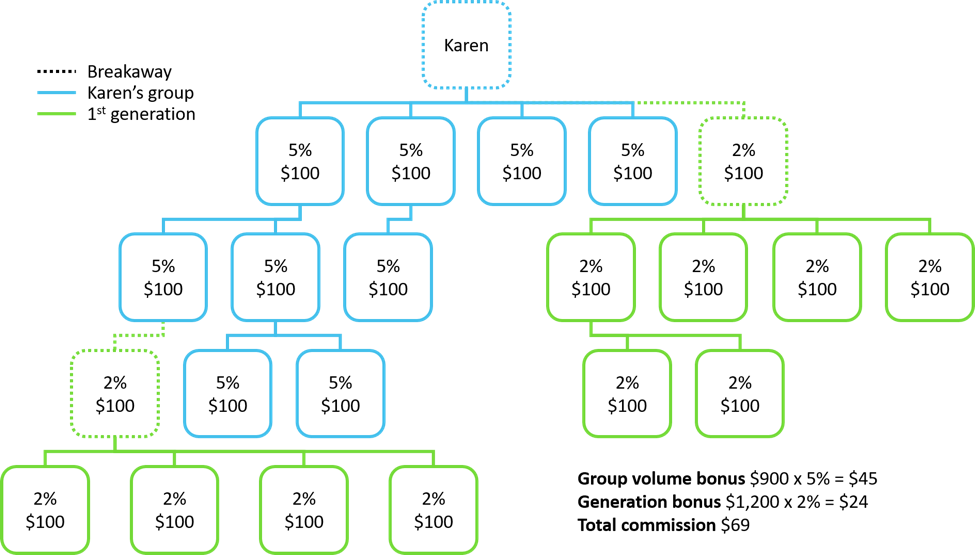 Karen’s organization grew, but her pay went down. This is a downside to the breakaway. The pay can change radically from month to month. This can be frustrating for your distributors but it also incentivizes them to continue enrolling and building their personal group.